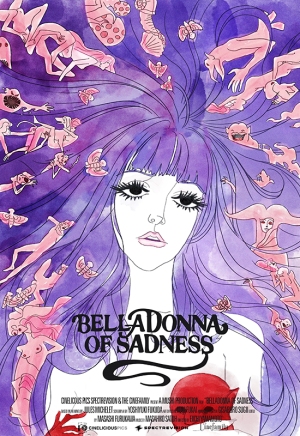 Synopsis: Once upon a time, two young people—farmer Jean and ingénue Jeanne—fell in love and decided to marry. We might hope they lived happily ever after . . .

Unfortunately, the medieval France they live in is ruled by a cruel Lord and a harsh Lady, and both they and their fellow villagers under the thumb of a judgmental Priest. When Jean cannot pay the required ten cows to the Lord to receive his blessing for the nuptials, the nobles take their payment in a different kind of flesh, debauching poor virginal Jeanne. As shocking and dramatic as this is, the couple’s horrors are only beginning, really. Jeanne’s pain calls a little devil to her, and he offers her power in exchange for favors (and eventually her soul), and though she initially resists him, the temptation to accept his offer grows with each additional depravity. The couple’s future holds pain, despair, mass death, resurrection, deals with a devil and paths that will encounter witchcraft. What happiness they find seems to be fleeting, alas. However, Jeanne’s journey carries her through good times and bad in a marionette march toward the bitter end of Yamamoto Eiichi’s gorgeous animated feature for adults, Belladonna of Sadness (1973).

Belladonna of Sadness might have a copyright date of 1973, but it only saw release in Japan and Europe at that time. It would take almost four decades to make it to American shores for a brief run. It is a strange flick, a sumptuous visual feast, and a lovely piece of animation. However, it is not a traditional animated film by any stretch of the imagination.

Belladonna of Sadness is mostly still artwork, which a camera moves gracefully across, giving it a sense of movement. Occasional elements or frames feature characters or objects moving on their own in the classic way—at one point, a drawbridge rises and booms shut; at another point, a woman races through untamed wilderness while pursued by furious and zealous villagers. For the most part, however, the film is told in still life images, with dialogue and songs overlaid. The setting is a fantastical France that never was, a place found only in the darkest fairy tales. The language and many aesthetic choices are very Japanese. The blending of these two values culminates in a curious picture that has no real equal. If the fantastical parts of Neil Jordan’s The Company of Wolves had merged with the erotic sensibilities of Alejandro Jodorowsky and then been cast in brilliant, colorful animation, the result might have been a movie similar to this one.

The colors and artistry are spellbinding. Although the images are mostly static, they are nevertheless gorgeous to behold. Whether the film invokes the idyllic existence of poor farmers harvesting weak crops or chooses to show the black plague sweeping through a village like some divine flood, it does so with style and imagination. The creativity on diplay is pretty grand.

And boy is it sexy as all get out. Trigger warning material aside—admittedly, the flick has A LOT of unwilling sexual congress—there are an incredible number of bits involving wild sexual abandon and erotic titillation. The film does not shy away from nudity or from pairs (or groups!) of people coming together in bacchanals. Men and women, women and women, even at least one instance of bestiality if memory serves me correctly. Bodies transform in unlikely ways, including a punching figure’s arm transforms into a massive phallus. A pair of woman’s hands come together in prayer, spread apart to transform the space between connected fingertips and connected thumbs into yawning vaginas, and then push together to merge into singular white space. Impossibly long hair flows across a tapestry, barely hiding the lusty deeds men and women happily perform while naked. Alas, there are no guy-on-guy sequences that I saw—though such things might have gotten lost in some of the bigger set pieces which fill the frame with all manner of figures in flagrante dilecto. Some might call such depictions of free spirited sexual abandon pornographic. I say they’re wrong, but each to their own.

The devil is a strong presence here. He arrives as a little wormlike creature (shades of William Blake’s “The Rose”?), and he grows with each passing visitation. He is a randy little dude, phallic of course and eager for a little wick-dipping when he can coax his targets to put out. He is less the source of all evil as presented in dogma than he is a weird champion of freedom from persecution and a bringer of change. Your mileage with blasphemy may vary, of course. His messages include empowerment, decrying corrupt rulership, using nature to heal people from disease, and other things that the ruling powers are quick to label as dangerous. Of course, they never see the devil himself; that figure only makes his presence known to those who suffer, those who might be ripe to throw off the shackles applied at birth. Of course, because he is the devil, one is always waiting for the other shoe to drop.

Belladonna of Sadness is a mishmash of genre tropes and story elements, taking some of the medieval morality plays (e.g., Everyman) and recasting them from a more progressive 1970s viewpoint. The film is one part fairy tale, one part wild sex romp, one part dissection of power structures, and one part fantasy adventure. A woman who has been abused finds her spirit’s cries for equal footing answered. Alas the price for doing this is terrible, but I get the feeling she would have gladly paid it even when the film arrives at its chilling conclusion.

There are no movies I can name off the top of my head to match its furious inventiveness and story. Belladonna of Sadness is a horrifying, libidinous excursion into fable and fantasy, which is worth experiencing at least once. It may require an adventurous spirit to see it through to the end. While it might not be a film for everyone (the guy in the theater who was sitting next to me was snoring before it reached the twenty minute mark), but some will find it to be a rewarding experience. I certainly did.

Belladonna of Sadness is available in DVD, Blu-ray and streaming editions.

Next up, we will check in with another singular example of Japanese animated film, the bizarre body horror piece VIOLENCE VOYAGER (2018). It is not yet available in the states on DVD, Blu-ray or streaming editions. Seek out a viewing if and when you can.

Born and raised in Michigan, I have set down roots in Massachusetts and currently Texas. I'm the author of the collection Hauntings & Happenstances and other entertainments. I have published reviews with Dark Scribes Press, www.HorrorReader.com, and more.
%d bloggers like this: