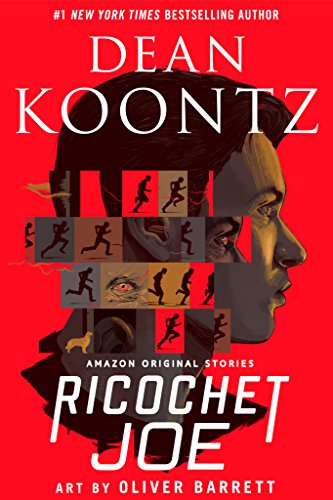 Before making the move to Amazon Original Stories for those Nameless series novellas as well as his upcoming novel deal, Dean Koontz joined up with the company for a novella length adventure featuring a guy named Joe. The star of Ricochet Joe is a sweet fellow, a sort of Odd Thomas character who does not yet realize he’s going to have an unusual life. Joe is a personable sort, optimistic, charming, doing charity work collecting litter, infatuated with a pretty gal by the name of Portia. However, one day his life switches gears when he finds himself caught up in a spooky paranormal plot. One moment he’s collecting litter with his stick and the next he is getting hit with some heavy duty awareness of scenes and items he should have no reason to be fascinated with:

Although he had no idea his life was about to be turned upside down and inside out and topsy-turvy, the change happened in an instant when he picked up an empty pint bottle of run to throw in his trash bag. Joe was for the most part soft-spoken, though he raised his voice when he said, “Corvette!”

Ten feet to his left, Portia looked up from an empty condom packet pierced on the end of her litter stick and said, “Corvette?”

Joe could not explain why he’d spoken the word with such force, or why he had spoken it at all. Nevertheless, he might have seized the moment to open a conversation with the girl; but that was not to be just then. What was to be astonished him: he dropped the empty rum bottle in his trash bag, dropped the bag, and ran off toward the library with his litter stick raised like a warrior’s pike. (Location 51)

From a Corvette parked outside the library, he then blurts out “Bus stop!” and “Rats!” and “Shit!” and finds himself on a mad run through town in pursuit of these different items. Some are literal, some appear figuratively.

Well, needless to say, this flurry of seemingly random images soon becomes significant as Joe finds himself caught up in a purse snatching incident—a witness to the crime not its perpetrator, naturally. Or would that be supernaturally? Paranaturally?

Anyway, this incident, which he terms a two-headed calf—something that’s weird but only happens once in a long, long while—is not the isolated incident he wishes it to be. Soon enough, he has another vision, and this time finds himself squaring off against an even more dangerous threat. And then another vision. And then another.

Well, it would seem that poor Joe is caught up in a mystery outside his expertise and control. He is doomed to catch ricochets from the future thanks to a bizarre fusion of science fiction and fantasy. This occurrence is not random, either. Although Joe supposes this to be something as unexpected as a lightning strike, the phenomenon hitting him is actually deliberate, an imposition place upon him the way all those impositions were placed upon Job (whose name, you will notice is only one letter off from our protagonist’s). However, Joe’s lot is not to suffer endlessly until the bet between divine powers is resolved. Joe is the next in line to receive the “honor” of pursuing evil. He is a knight of sorts, a paladin defending a faith he knows nothing about against a monstrous adversary he does not understand, which can occupy the bodies of seemingly normal folks like a spiritual tapeworm. Joe has been granted the power to see this enemy as well as the necessary skills to battle it. Although he is naïve and trusting enough to buy into this destiny—after all, how else to explain the visions and the encounters with various darknesses he never expected to find in his town? Unfortunately for him, the hunt winds its way to somewhere personal. The body this parasitic horror is currently occupying turns out to be someone he has issues with attacking directly . . .

Ricochet Joe is an odd tale that hits the ground running in proper Dean Koontz tradition, unspooling a sinister mystery in the face of a squeaky clean protagonist. The short work hearkens back to some of Koontz’s other works, of course. As a writer, he is drawn to protagonists who see things the rest of us do not. Be it the unwilling recipient of clairvoyant sights in The Vision, the lad who can see goblins hiding inside human beings in Twilight Eyes, the utterer of mysterious messages such as “There is an Enemy. It is coming. It is relentless,” in Cold Fire, the aforementioned Odd Thomas, a seer of sorts who can see both ghosts of the wrongly slain as well as fiendish entities whose presence portend tragedy and horror, and even to the newest character on the block, the Nameless protagonist of the six part series of novellas . . . Koontz likes characters who are caught up in foreshadowing, whose experiences can lend a sort of ticking clock to the plots they star in as well as give readers either a hint of what is to come or a view of how the mundane world really operates. It’s all in great fun in Koontz’s hands, of course. Ricochet Joe is no exception. When the flashes are happening, and the events they portent unfold, the story moves along at a delirious clip.

As with some of my favorite Koontz works, including Tick-Tock and Life Expectancy, Ricochet Joe also occasionally veers into territory that can only be described as ludicrous. The situation with the enemy known as Parasite is both dire and yet wonky enough to make me giggle. It’s a b-movie threat in a story that did not seem like a low budget creature feature. In some ways, Ricochet Joe offers readers a return to the dynamic at the heart of Koontz’s earlier thriller Watchers, in which a bitter military dude finds a new lease on life thanks to a super smart dog (Einstein) and the horror chasing it (The Outsider). I still have fond memories of reading that novel when I first encountered it almost thirty years ago. This novella offers a little of the same, including a Golden Retriever that is more than it seems and a monstrous entity with which it is locked in battle.

Some readers might well be weary of this sort of storyline. Koontz loves his dogs, after all (though they made few actual appearances in the Nameless series), and he includes them as major characters in plenty of books and novellas. Ricochet Joe is one more example among many.

Is the novella any good? It’s a fast paced read, the characterizations are solid and the action is well written. The protagonist’s journey is brief and it leads to a conclusion that is not really a conclusion at all. There is a setup for more to come in the future, which makes it feel like another attempt at establishing a series character in the short form. As someone familiar with longer treatments of similar topics in Twilight Eyes, Watchers, and Odd Thomas, I was not terribly surprised throughout the story, though there are some nasty turns I did not anticipate. However, Ricochet Joe falls into the sort of comfortable mythic tale of noble heroes and vile villains that I have come to expect from Koontz. There is also enough of a sense of humor to keep my attention, which doesn’t hurt.

One of the pleasant surprises for me was the inclusion of some heavy duty science in the book. Quantum physics is a breeding ground for fascinating speculations, ranging from weird horrors to surreal speculations. For me, it elevates anything it is found in. Fun fact, John Carpenter’s Prince of Darkness was one of my first exposures to the philosophical side of the subject—the film is a treatise on quantum physics, religion, and the horrors appearing in the ground where those two diametrically opposed schools of thought meet. It got my noodle going, and I credit that feature as one of the inspirations for me to pursue a career in physics. The topic gets some inclusion in Ricochet Joe, as well, which lends the work some uniqueness. Koontz has long mated science fiction with his dark fantasy tales—hell, he started his career with sf novels and was even included in Harlan Ellison’s seminal Again, Dangerous Visions anthology. Although I sometimes check out before taking his trains of thought to their final destination, I enjoyed his thought experiments in this particular novella. Like Prince of Darkness, the Ricochet Joe novella blends spooky physics with supernatural touches in order to produce a strange story that highlights the mysterious world we live in. Is it one hundred percent successful? I enjoyed my time there.

As novellas go, Ricochet Joe is an entertaining enough experience and a thoughtfully written one. I caught it on audiobook and it livened up the commute to work for a couple of days. While I would not rank the piece in the highest tiers of the author’s many works, it is a fun enough read that did not quite captivate me the way other works from the author have aside from those spooky interactions between cold science and warm faith.

Ricochet Joe is exclusive to the kindle, though an audiobook version is also available. Grab one of the eBook and audiobook editions.

Next Sunday, we will check in with another serial killer thriller from the mind of Dean Koontz. Darkness Under the Sun was a novella written to accompany his novel What the Night Knows. In this spirited tale, birds of a feather do evil together as a man mentors a young man in the fine art of horror. Available as a standalone eBook and audiobook as well as incorporated into an audiobook collection with Demon Seed and The Moonlit Mind. It also appears in the mass market paperback and eBook editions of What the Night Knows.

“The Making of a Paladin: Dean Koontz’s Ricochet Joe” is copyright © 2020 by Daniel R. Robichaud. Quotes and cover image taken from the kindle edition.

Disclosure: This site is part of the Amazon Associates program. Qualifying purchases made from the product links found above can result in the site receiving monies from Amazon.com at no additional cost to you.

Born and raised in Michigan, I have set down roots in Massachusetts and currently Texas. I'm the author of the collection Hauntings & Happenstances and other entertainments. I have published reviews with Dark Scribes Press, www.HorrorReader.com, and more.
%d bloggers like this: